Posted on October 10, 2015 by lorrainewarren

Brymore Academy student, Herb Elliott, is proudly displaying his bronze medal from the English Schools Championships. Herb was crowned 3rd best racewalker after being selected to represent Somerset after months of gruelling competitions.

In fact four students from Brymore were selected to represent Somerset in the prestigious English Schools National Championships. In the racewalking George Clay was placed fifth and Charlie Wilson was unplaced due to an injury and in the combined events student George Watts was lower down the order but performed brilliantly.

The Championships, which were held in Bedford, hold a special place for Brymore with Alex Wright, a previous student and Britain’s number one racewalker, having won in 2007.

Brymore PE Teacher, Lloyd Williams, say that ‘each of the boys has worked tirelessly to be the best they can. Herb coming away with a bronze was a dream come true for him and we have high hopes of them all continuing to do the school and themselves proud’. 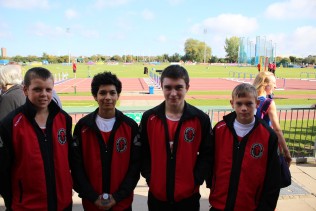