The main School House of Brymore has had a long, varied and interesting history. Spanning over 800 years, the house has seen the best and toughest of times – through Civil war, World War and changing architectural fashions. Not to mention its changing use from stately home to school, to prison, to the billeting of troops and back to a school again!

During the Saxon period a man named Edric worked the land. Following the Norman Conquest and into the 12th century the deeds were owned by the ‘de Coursey’ family. The origin of the name Brymore is unclear – it may have come from a Geoffrey de Bramora who owned the land in 1216 or it may be a corruption of ‘Broom Moor after shrub the wild yellow flowered shrubs. 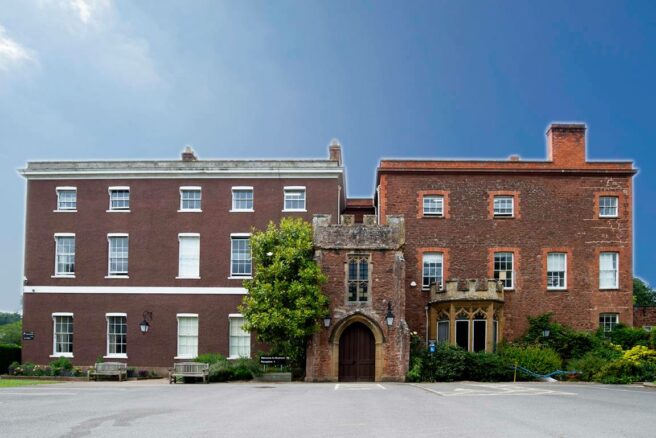 The house came into the Pym family in the 13th century and it was Philip Pym who was probably responsible for building the porch during the 1400s.

The most celebrated member of the family was John Pym, born at Brymore in 1584. He became a Member of Parliament for Calne in Wiltshire in 1614 where he began a career of opposition to Charles 1.

In 1729 the HALES family bought the house, and at the end of the 18th century Sir Philip Hales rebuilt it with the exception of the Porch.

In 1836 when Sir Philip’s daughter died the estate passed to the Bouveries. They added to the house and in 1892 a third storey was added to the 19th century part with Basil Cottan as the architect. This provided twelve bedrooms, a servants’ hall and service rooms.

Although the Hales had added considerably to the house early in the 20th century one member of the family over-indulged his passion for the stage, bringing entire theatre companies to Brymore, from London on specially chartered trains, for a weekend’s entertainment. Not surprisingly the estate fell into decline and in 1928 was sold to Gordon Cecil Hart.

At the outbreak of the Second World War it was requisitioned and the girls of Malvern College spent a year at Brymore. Subsequently the house was used for Italian and German prisoners of War.

In 1943, the 535th Automatic Weapons Battalion of the US Army were billeted at Brymore while preparing for the D-Day landings. Some of the buildings they erected are still used as classrooms today. The initials of one American is carved in the lead on the roof of the main house, and their gun emplacements can be found on the site. The heavy vehicles were parked along the front driveway where the soil is so compacted so that it is still impossible to grow trees between the drive and the stream.

In 1951 the Somerset County Council purchased the estate at a cost of £6,600 where following extensive repairs and alterations it opened as a Secondary Technical School in September 1952. The extensive walled gardens (one section dated 1753) are used for students to have their own individual plots, and the large, late nineteenth century stable block now houses the schools workshops. Much modernisation has since occurred with £ 6 million being spent in recent years on new boarding accommodation and a new teaching block.