Posted on December 4, 2012 by lorrainewarren

Brymore School, with the help of the Boots and Saddles Western Re-enactment Group, recreated the famous Wild West on the grounds in Cannington.

The recent flooding had put paid to one visit but with a frosty morning firming the ground the re-enactment group set up the O.K. Corral and set to work dressing up as characters from the Wild West, including Wyatt Earp himself. They then began going through scenarios with all year groups of Brymore Boys ending with an exciting gun fight between the Earps and the Cowboys. The group raise money for Help for Heroes and with boys and staff donating they raised a few pounds for a worthy cause. 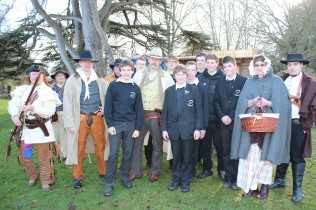