Posted on September 21, 2012 by lorrainewarren

An idea to raise money for the Barnardo’s charity at Brymore more than 4 years ago has sparked and national initiative for the charity and this legacy continues to raise money all these years on.

The current Brymore Boys were visited and presented to by Barnardo’s representative, Robin Turner. Mr Turner informed them that the boys who attended four and a half years ago were so enthused by an assembly that they wanted to raise much-needed funds for the charity and so came up with the idea of a virtual cycle ride. The boys hired in exercise bikes, planned and calculated the route from Brymore to Paris and then undertook the challenge whilst raising over £1000 in the process.

Since Brymore threw down the gauntlet with this epic feat many schools have undertaken a variety of approaches including a virtual walk of Mount Everest and a virtual Tour de France under the ‘Barnardo’s Virtual Challenge’. 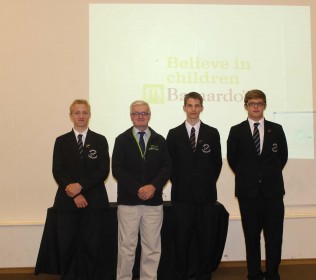