Posted on January 8, 2013 by lorrainewarren

‘Smiles for Christmas’ was chosen as an opportunity to allow Brymore School a chance to give something back to the local community of Cannington.  There are 48   elderly people who live in supported housing in Cannington and most of these will have spent Christmas on their own.  The boys and staff of Brymore really hoped to make this one to remember for them and so worked with Homes in Sedgemoor to try and create something special.

Each Boarding House within the school competed against each other to design, create and fill a Christmas hamper.  All boys were expected to input into their house hamper whether that be some gifts or simply spending time on the design and making of it. All three houses came up with a different theme and the overall winners were School House with a tractor design. Once the items were distributed to the 48 elderly residents there was enough left over for the Homes in Sedgemoor team to help out some families in the village that had been affected by the awful flooding we had in November.  Colleen Hayes from Homes in Sedgemoor stated that ‘the school’s generosity was gratefully received by the supported housing residents in Cannington and the school is a credit the community’. 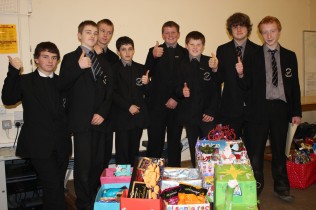